This article is meant to help you understand how assemblies work in Paperless Parts by explaining the data types and terminology you will be working with.

Parts are any physical thing designed for a specific form or function. Assemblies themselves are parts, and consist of a structured collection of multiple individual parts that get put together. When designing and manufacturing assemblies, it is important to organize the different lower level parts, which we will refer to as child parts, into a structural hierarchy of parent-child relationships beneath the top level part, or the root part. This structural hierarchy, or tree, helps with design efficiency and manufacturing accuracy.

Let’s walk through an example of an assembly to illustrate how assemblies work in Paperless Parts. Let’s say we need to manufacture this assembly: 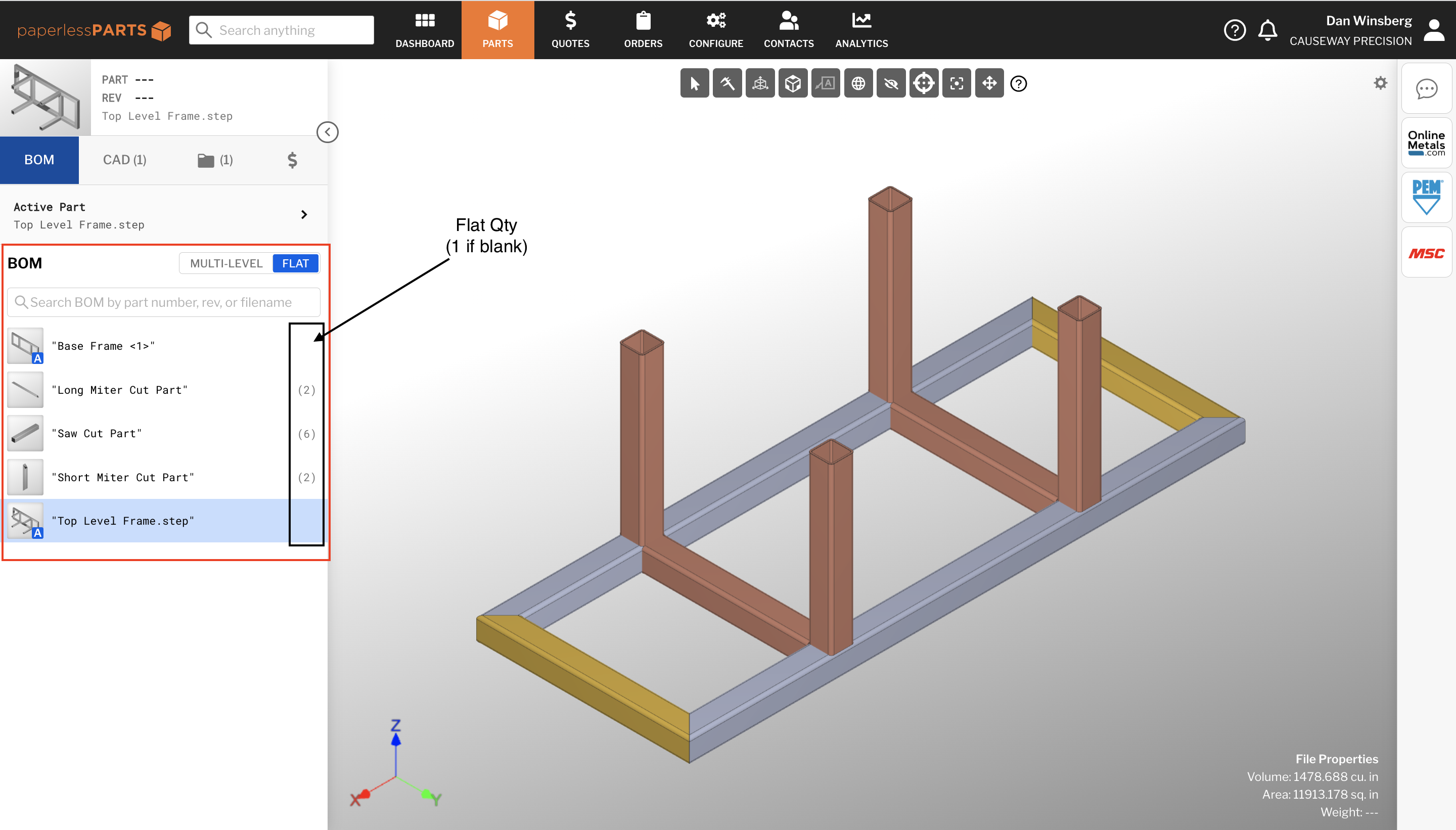 In this assembly, the top level part, otherwise known as the root part, is called “Top Level Frame”. There are four lower-level parts, or child parts, including a subassembly called “Base Frame”, and three unique manufactured parts named “Saw Cut Part”, “Short Miter Cut Part”, and “Long Miter Cut Part” colored red, yellow, and gray respectively. These parts are listed in alphabetical order in the flat BOM with their associated flat quantities, or how many times they appear in the entire assembly, in the above screenshot.

Note: The root node is special, and has no parent node and always a quantity of one.

The flat BOM in the part viewer is the actual list of unique part objects in the tree structure, presented in alphabetical order. Here is how the multi-level BOM and flat BOM relate to each other in this example:

If a single part has multiple nodes within an assembly tree, the same underlying part data will be linked to all nodes. In the above example, even though there are two nodes of “Saw Cut Part” in this part tree, there is only one part object that is referenced in the two occurrences. We see this concept reflected in the multi-level BOM in the part viewer. When you select a node of “Saw Cut Part”, all other nodes that are linked to this part will also be highlighted: 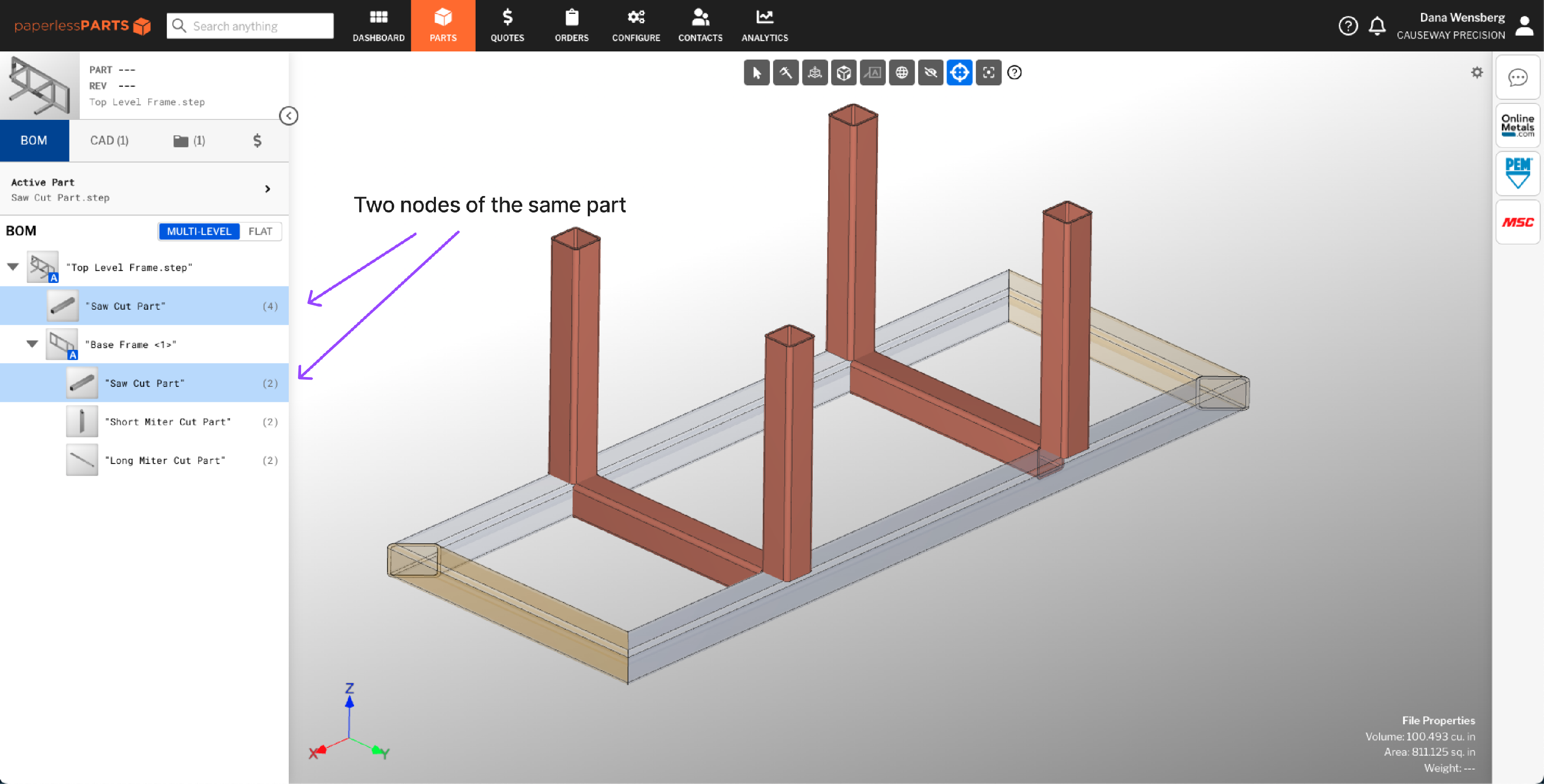 In the flat BOM, you can see we only have one part object focused, and its flat quantity captures all quantity contributions from its two separate nodes:

The primary reason why we structure the data like this is so you do not have to re-quote the "Saw Cut Part" multiple times. We will see how this works in the next section.

So now that we have our part structure, we want to quote it. When quoting a part structure, Paperless Parts uses another layer of data called components. A component is a part with pricing information, where things like materials, operations, and customer requested quantities are stored. You interact with component data in the quotes page. A component’s materials and operations refer to the information stored within a part, such as its geometry, to drive the costs that get calculated. The diagram below explains how components relate to parts:

On components, you will do things like assign a process, add materials, and add operations. On the root component, you will also do things like add customer requested quantities, add pricing items, add add ons, and add expedites. Similar to parts, it is important to have a tree view of components when quoting to help keep things organized. The tree view beneath the expanded quote item is an equivalent view to the multi-level BOM in the part viewer, except it is tying nodes to components instead of parts:

When you have toggled to the Child BOM display of the BOM, you are viewing the component nodes directly beneath the root component:

Similar to functionality we saw in the multi-level BOM in the part viewer, when you click to expand child components in the assembly tree, it will show you all nodes of the component in that tree. Let’s look at what happens when we expand the “Saw Cut Part” component: 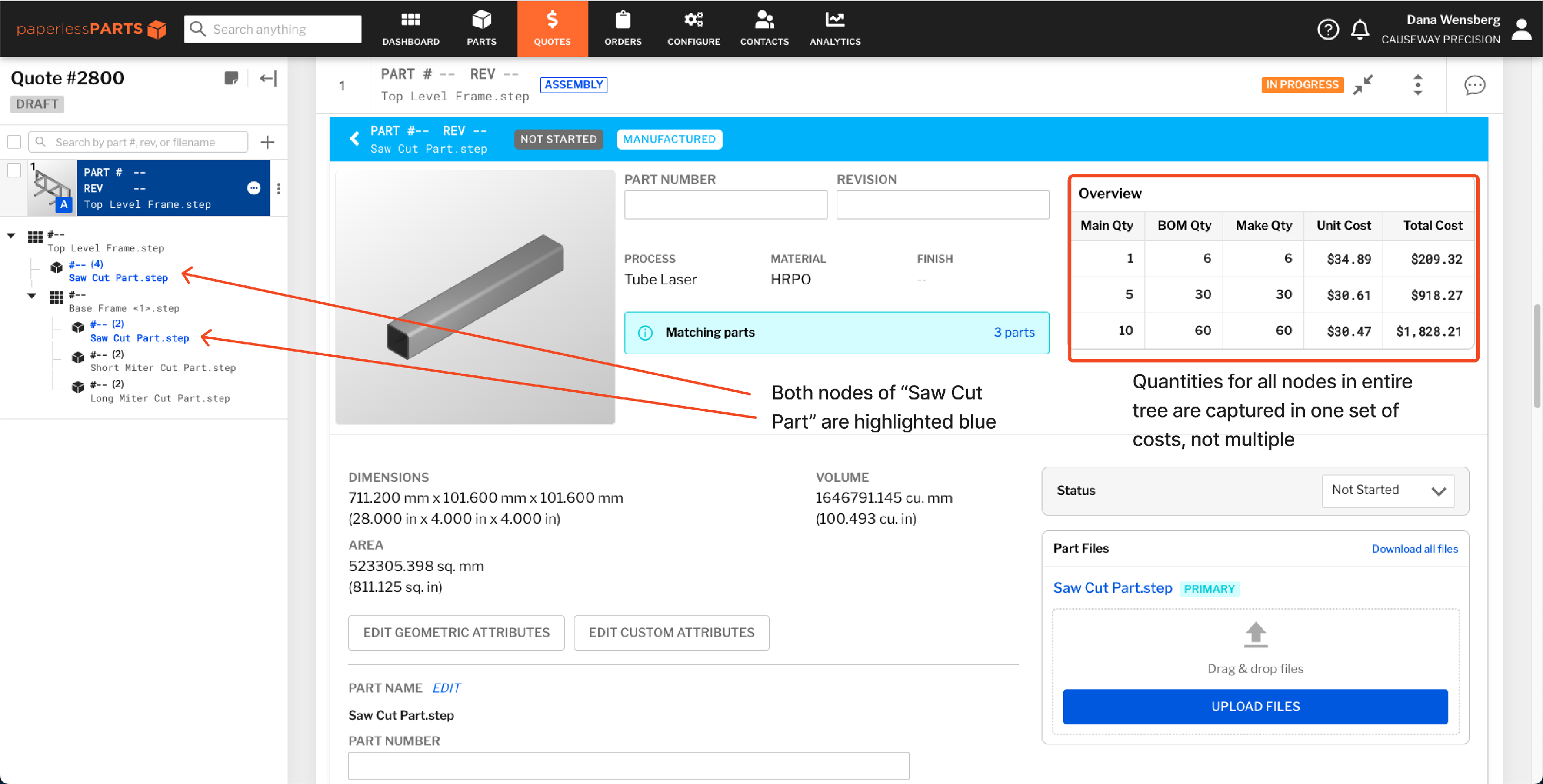 What this means is that you will only have to configure the pricing on a child component once regardless of how many times it appears in the BOM structure. You will notice above that the Make Qty is 6 for this component for a customer requested quantity of 1, and not 2 or 4. The system will intelligently calculate the total number of pieces you need to make for each child component based on its location in the tree and the customer requested quantities. This total make quantity will then be passed into the material and operation formulas to calculate costs.

Note: When looking at the BOM in the context of a quote, it is important to understand that while you are working with components, the structure of the components, and the parent/child relationships between them, are defined with nodes and parts. The Child BOM and assembly tree of components are really just views of component data that sit on top of the underlying part and node data.

Within a quote item, you will see many BOM building actions such as adding new components, adding new subassemblies, moving BOM levels up and down, deleting nodes, and others. When performing these actions, you are actually editing the structure of parts and nodes, while also making changes to components. Let’s walk through an example to demonstrate how this works.

Let’s say you want to add another manufactured component to the “Base Frame” subassembly. It will have the part number “Sample Part” and a node quantity of 1:

When you are performing this action, you are actually doing three things:

Let’s illustrate this action by illustrating the data objects with a diagram: 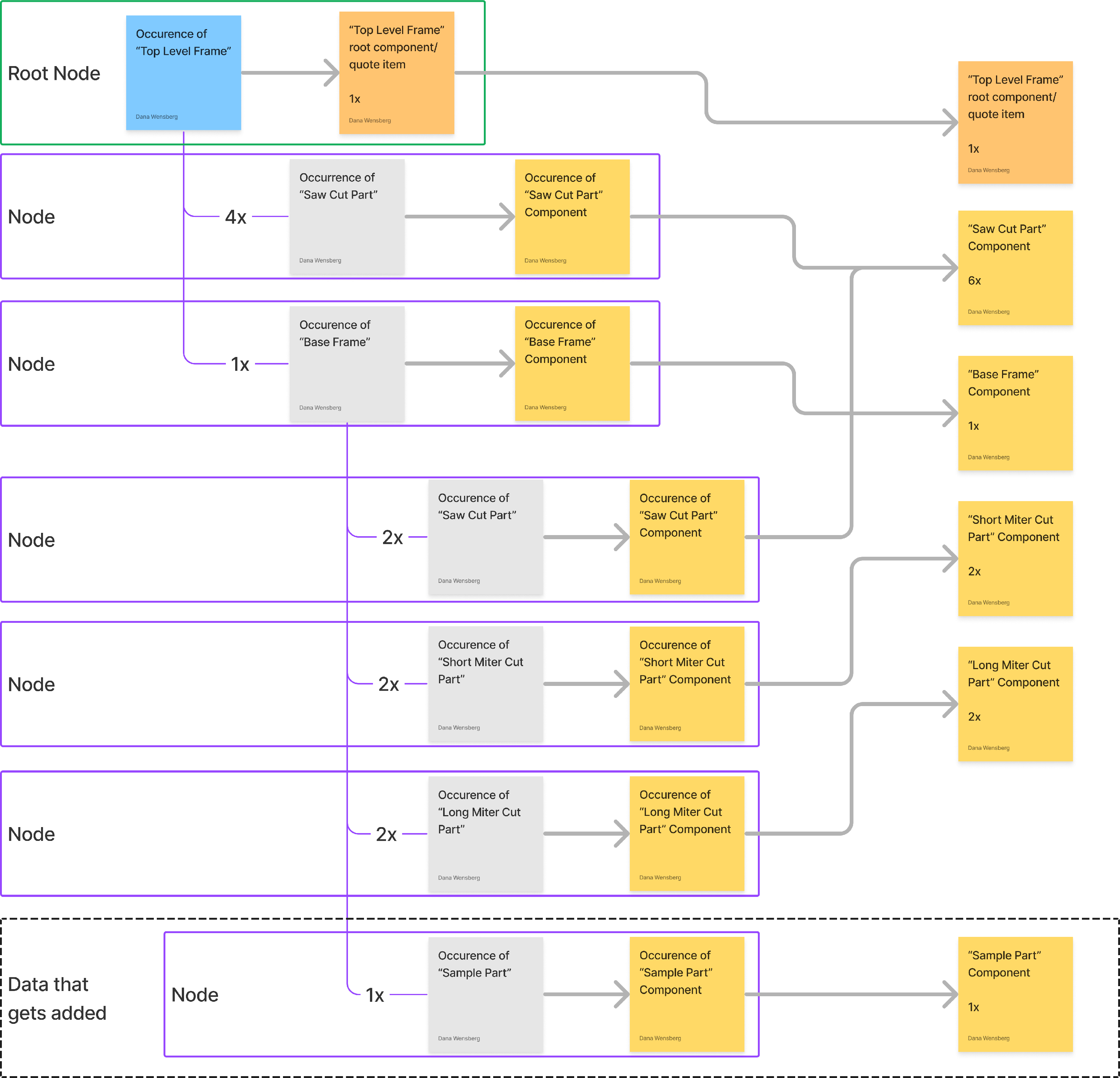 This concept extends to all BOM building and editing actions. Here are some additional examples walking you through what data gets created/edited associated with user actions.

When uploading a CAD model to a quote, the system is:

When adding a part to a quote from the part library (that you have not quoted before), the system is:

When moving down a BOM level, the system is:

Please refer to other knowledge base articles for more information on what is possible when it comes to BOM editing in Paperless Parts.

Did this answer your question? Thanks for the feedback There was a problem submitting your feedback. Please try again later.
Last updated on November 8, 2022