Have you ever uploaded an assembly CAD file and found that the BOM extracted from the CAD file is not quite right for quoting? If so, then you came to the right place. This article will explain how you can take the CAD-extracted BOM and transform it into a structure that works for quoting.

Let’s walk through the example of when a customer gives you a CAD model with an unstructured, flat BOM for an assembly. Before you start quoting out individual components in the assembly, use the BOM editing tools to set up a more favorable BOM structure for quoting. The video below will walk you through how to use tools like creating manual subassemblies and moving down a BOM level in this context:

Using delete and "Move up a BOM level"

If you ever make a mistake when moving down a BOM level, you can effectively undo the action by performing a "Move up a BOM level" action. Let’s take that exact same assembly and “restore it” to the original CAD-extracted BOM structure:

Splitting a node down a BOM level

Let’s look at a more advanced example, where you would need to “split” a node into more than one location to achieve the right BOM structure. See the video below to walk you through an example looking at pieces of hardware:

Now let’s do the same exercise we did before, and “undo” the BOM edits we just performed:

Another situation where the CAD-extracted BOM may be incorrect is when the node quantities are incorrect. The customer may have forgotten to add in a few pieces of hardware or included a duplicate of a geometry as a reference construction or as a mistake. In this situation, you can simply edit the CAD-extracted quantity in the child BOM. 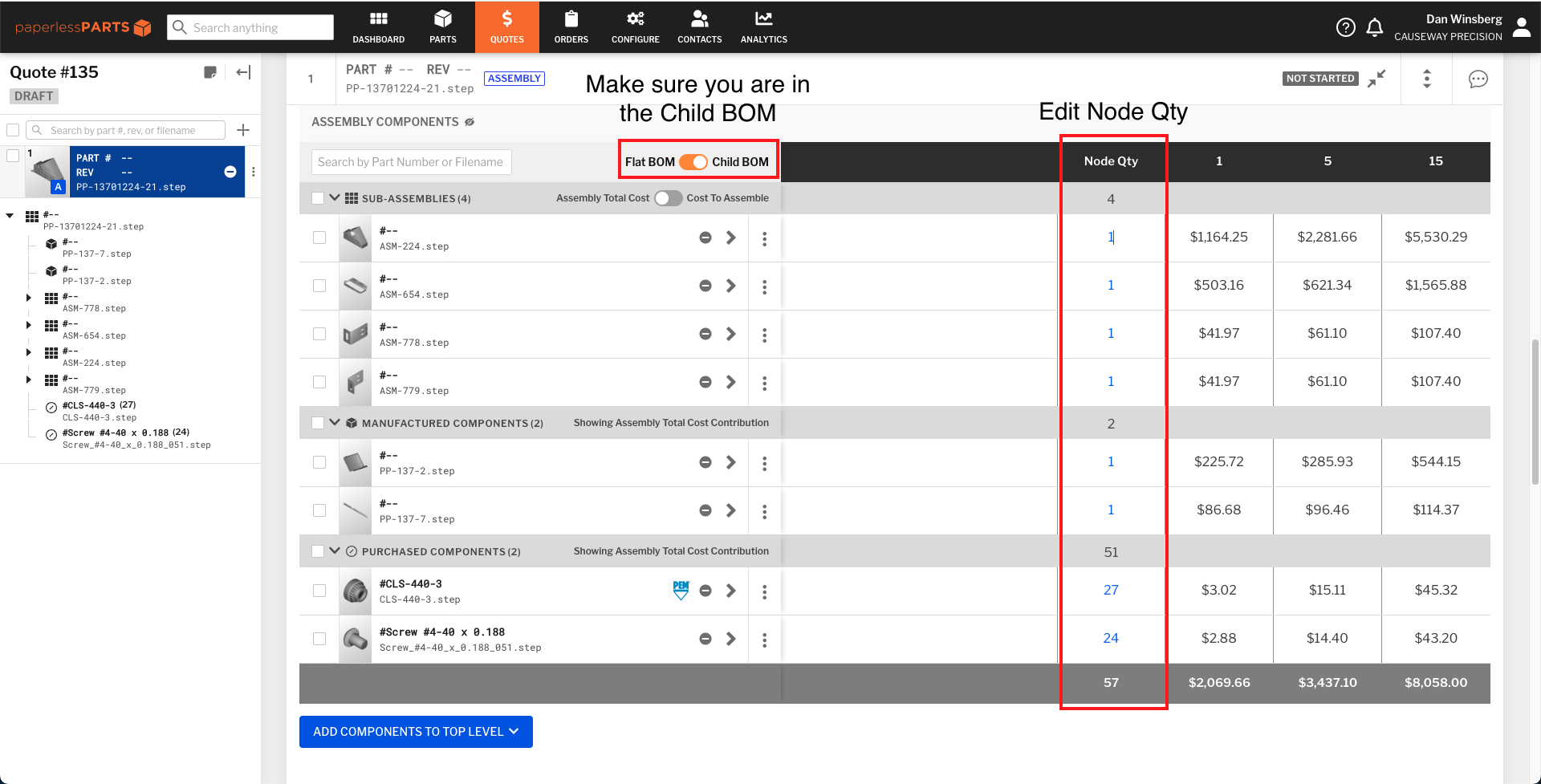 Note: If you edit the node quantity of a subassembly, the system will automatically update all of the flat, BOM, and make quantities of itself and all of its child components.

Will my pricing refresh after any edits to the BOM?

Yes, we will refresh pricing on all components in the BOM that are affected by any restructuring actions.

What do the different things mean in the “move down a BOM level” drawer? 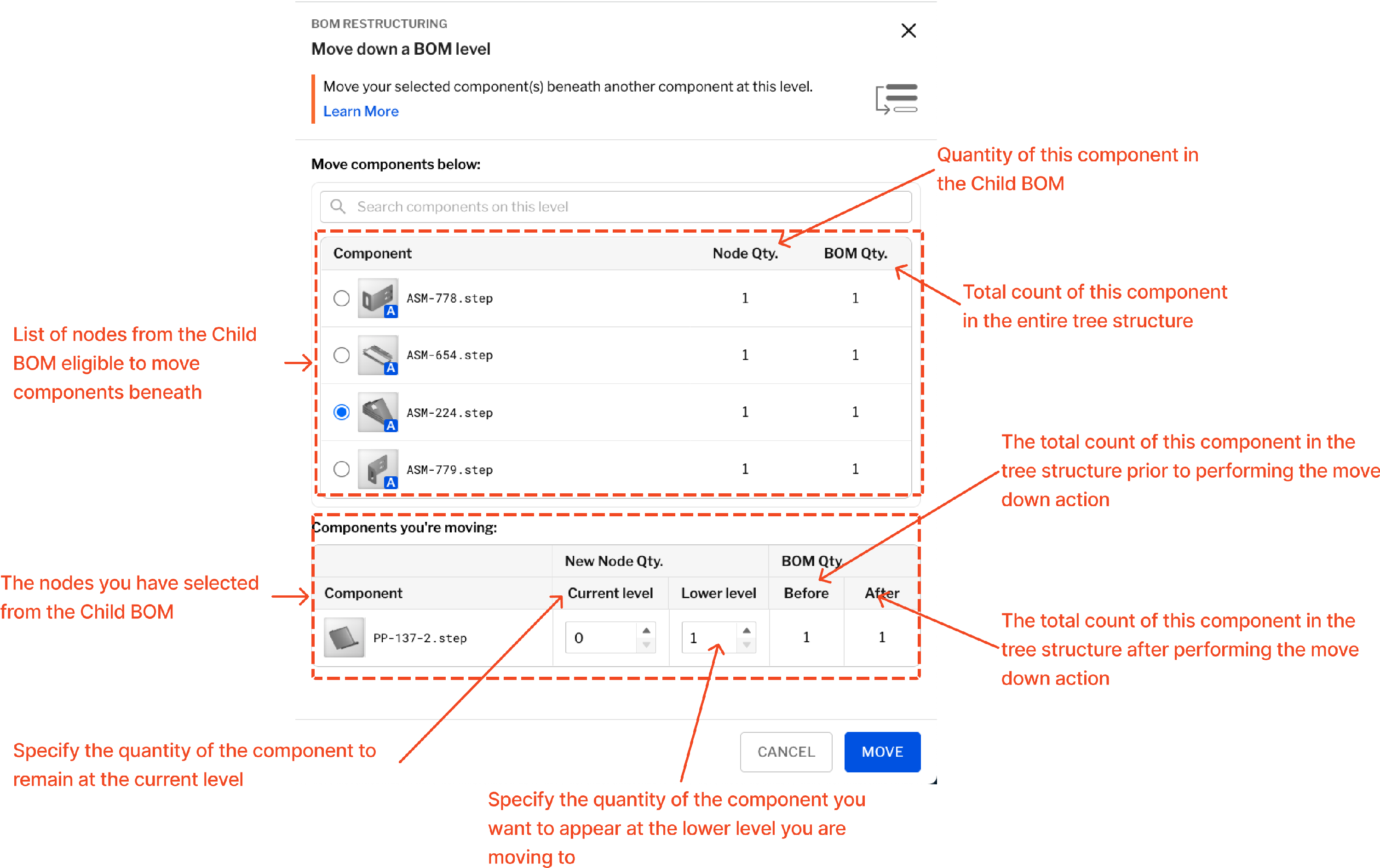 What do the different things mean in the “move up a BOM level” drawer? 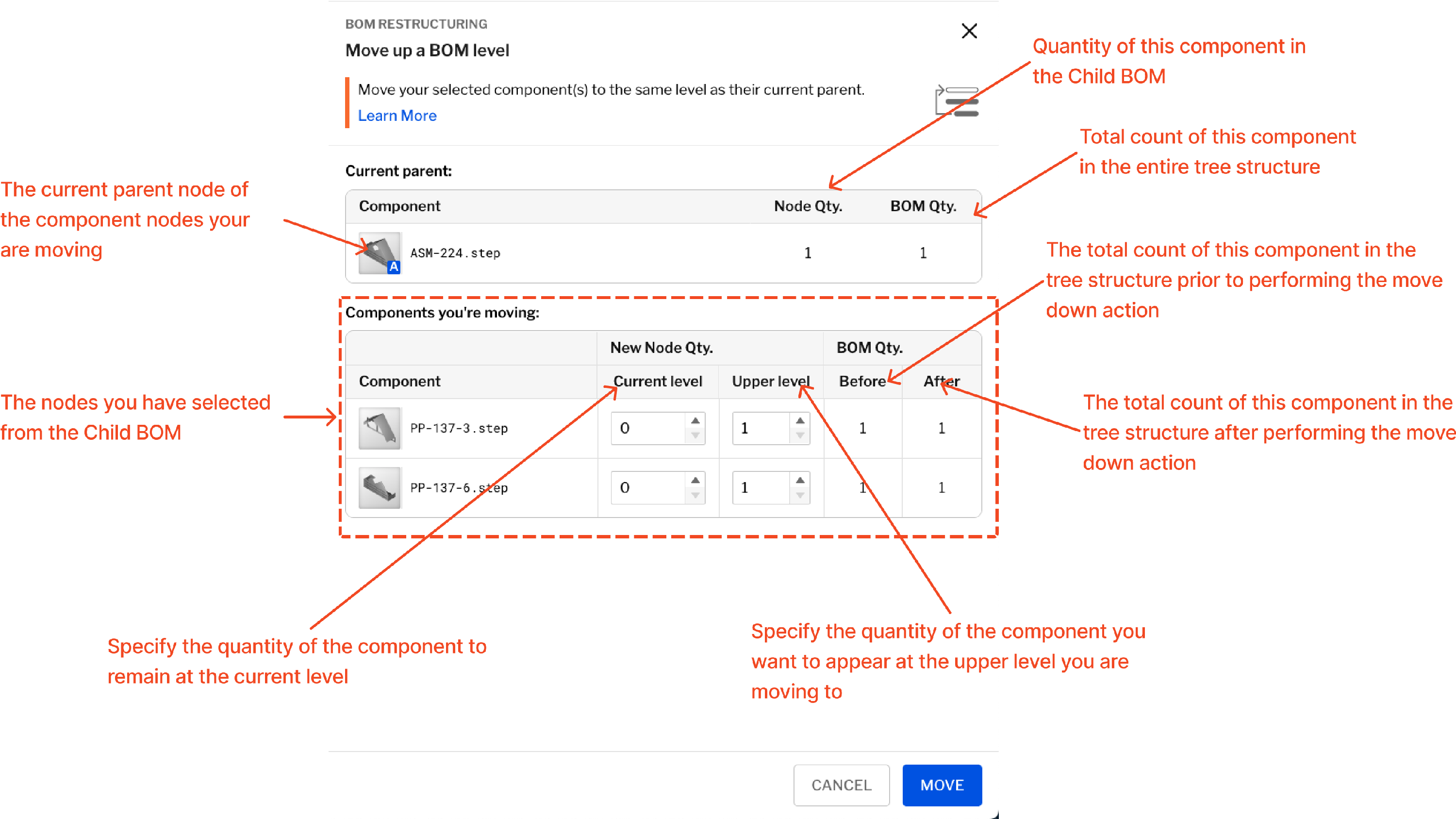 Why should I edit the CAD-extracted BOM instead of building the BOM manually from scratch?

Leveraging the CAD-extracted BOM gives you a starting point to work off of that will prevent mistakes and allow you to finalize the BOM faster than if you were building it manually. The larger the BOM the more benefits you will get. Also, when using CAD, your geometrically driven pricing formulas can leverage all of the benefits of Paperless Parts geometric analysis. Your formulas can use geometric properties like volume, area, dimensions, bend count, volume removal, etc. without you needing to input those numbers manually.

When “splitting” a node, can you select specific instances of a part in the viewer to move up or down a level?

No, you cannot. However, the geometry of the instances is identical and shared. Being able to select specific instances of parts would not provide any added benefits to costing automation.

When moving a node up or down a BOM level, will it “merge” with other nodes of that part in the lower or upper level?

Effectively, yes. Whenever you specify the quantity that will be at the upper or lower level, that is the outright quantity. These are not “add” actions, where you are saying “add” this many of a part to a lower or upper level. You are telling the system “I want to have N number of this part at this level”.

When editing the BOM in the quotes page, will that change the CAD tree in the part viewer?

No. Edits to the BOM will not affect the CAD tree. We will always present the same CAD tree structure originally found in the file when viewing the CAD model in the viewer.

Can I edit the BOM in the part viewer?

No. This is functionality we hope to add in the future.

Did this answer your question? Thanks for the feedback There was a problem submitting your feedback. Please try again later.
Last updated on August 8, 2022